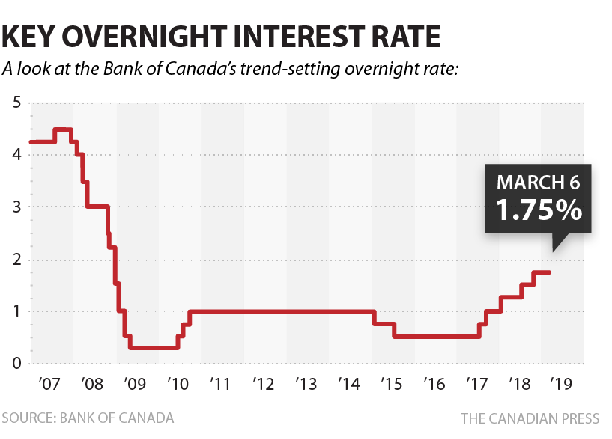 Bank of Canada Reduces Prospects of a Rate Hike

In a very dovish statement, the Bank of Canada acknowledged this morning that the slowdown in the Canadian economy has been deeper and more broadly based than it had expected earlier this year. The Bank had forecast weak exports and investment in the energy sector and a decline in consumer spending in the oil-producing provinces in the January Monetary Policy Report. However, as indicated by the mere 0.1% quarterly growth in GDP in the fourth quarter, the deceleration in activity was far more troubling. Consumer spending, especially for durable goods, and the housing market were soft despite strong jobs growth. Both exports and business investment were also disappointing. Today's Bank of Canada statement said, "after growing at a pace of 1.8 per cent in 2018, it now appears that the economy will be weaker in the first half of 2019 than the Bank projected in January."

As was unanimously expected, the Bank maintained its target for the overnight rate at 1-3/4% for the third consecutive time and dropped its earlier reference for the need to raise the overnight rate in the future to a neutral level, estimated at roughly 2-1/2%. The Bank also added an assertion that borrowing costs will remain below neutral for now and "given the mixed picture that the data present, it will take time to gauge the persistence of below-potential growth and the implications for the inflation outlook. With increased uncertainty about the timing of future rate increases, the Governing Council will be watching closely developments in household spending, oil markets, and global trade policy."

At the same time, Governor Poloz seems reluctant to abandon entirely the idea that the next step is likely higher -- making him a bit of an outlier among industrialized economy central bankers. We are left with the view that the Bank is unlikely to hike interest rates again this year. The global economy has slowed more than expected and central banks in many countries, including the U.S., have moved to the sidelines. Market interest rates have already dropped reflecting this reality. According to Bloomberg News, "swaps trading suggests investors are giving zero probability that the Bank of Canada will budge rates, either higher or lower, from here. The Canadian dollar extended declines after the decision, falling 0.7 percent to C$1.3438 against the U.S. currency at 10:04 a.m. Yields on government 2-year bond dropped 6 basis points to 1.68 percent."

In separate news, local realtor boards reported this week that recent housing market patterns continued in February. Resale housing activity fell last month to its lowest level for a February since 2009 in both Vancouver and Toronto, while home sales ramped up in Montreal, marking four years of continuous growth.

The month-over-month declines in Vancouver and Toronto were substantial. Home resales dropped by nearly 8% (on a preliminary seasonally-adjusted basis) in Toronto and by more than 7% in Vancouver. Soft demand in Vancouver kept prices under downward pressure in what has been a buyers' market. Vancouver’s composite MLS House Price Index (HPI) is now down 8% from its June 2018 peak. And the correction probably isn’t over. In Toronto, the MLS HPI in February was still 2.3% above its level a year ago, though it has decelerated in the past couple of months from 3.0% in December.

Blasts of bad weather can easily exaggerate demand weakness in winter when markets are at their seasonal low point. However, Montrealers certainly seemed impervious to the weather.

More complete housing data will be available mid-month when the Canadian Real Estate Board releases its February report.

This entry was posted on March 6th, 2019 | Posted in General