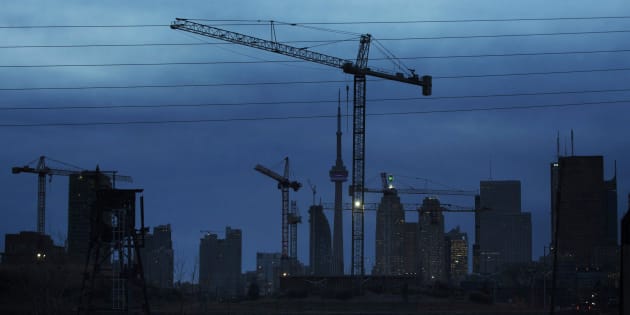 Construction cranes along the skyline in Toronto, Dec. 6, 2012. The slowdown in Canada's housing market will get worse before it gets any better, a new analysis predicts, because the country is about to be flooded with a "huge amount" of new homes.

The slowdown in Canada's housing market will get worse before it gets any better, a new analysis predicts, because the country is about to be flooded with a "huge amount" of new homes.

"Canada has been undergoing a construction boom," Capital Economics senior economist Stephen Brown wrote in the report issued last week. "As has been typical of historic real estate cycles around the world, new supply will reach the market just as demand is falling."

If the percentage of unsold new homes in Vancouver remains what it is, the number of unsold houses on the market will double in the metro area over the next two years as 40,000 new homes come on the market, Brown predicted. 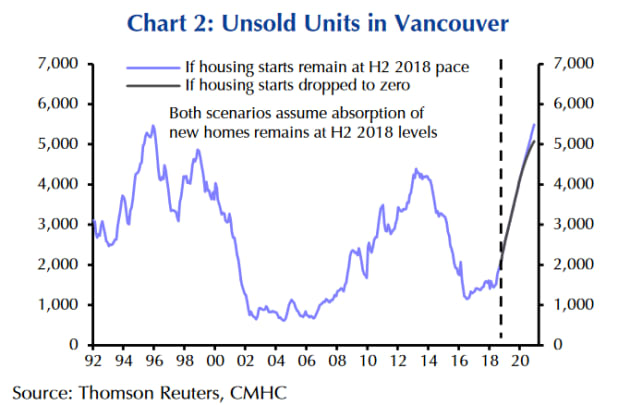 CAPITAL ECONOMICS
Unsold units in Vancouver will pile up over the next two years, even if developers cut new construction to zero.

The situation isn't quite so dire in Toronto — yet. Just one per cent of new homes in the area sits unsold, compared to 7 per cent in Vancouver. But Brown expects Toronto to follow in Vancouver's footsteps this year.

Developers will react by cutting back on new housing starts. But the lag between start and completion means the problem will happen regardless of what developers do now, Brown suggested. Even if Vancouver stopped building new homes entirely, the oversupply in the next two years would be nearly as large as if construction continued.

All of which could have a negative effect on the economy, starting with falling house prices.

"That, in turn, is likely to feed through to weaker consumer spending. Even more significantly, an end of the construction boom will weigh heavily on investment," Brown wrote.

But not everyone is convinced that the elevated levels of home construction mean there is an oversupply. In a report last year, Bank of Montreal noted that Canada's population growth has accelerated in the past few years, thanks to higher immigration levels, and is now growing at the fastest pace in decades. That means we may be underestimating just what the "right" amount of new housing in Canada is, the bank's economists suggested.

"As has been typical of historic real estate cycles around the world, new supply will reach the market just as demand is falling."
--Stephen Brown, Capital Economics


That's also the view of many in the industry, who see a higher chance of housing shortages than oversupply in the coming years.

"With an increasing number of gainfully employed people looking to put a roof over their heads, and the scarce availability of rental accommodation, policy makers in our major markets will once again be struggling with housing shortages," said Phil Soper, president of realtor Royal LePage, in a market forecast in December.

"More than an affordable housing problem, we will once again be facing an overall housing supply crisis," Soper said.

"The future for Canadian housing remains bright, perhaps too bright."