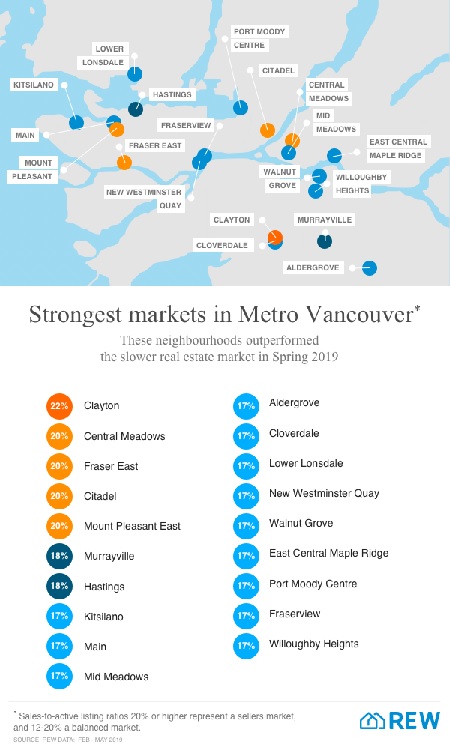 It’s not all doom and gloom for the Metro Vancouver housing market.

A new study from REW.ca suggests there is one seller’s market — and several just shy of that status — in the region.

“In the current slowing real estate market, it’s easy to read the headlines and imagine that sales are plummeting all over the region and it’s becoming a buyer’s market. But that’s not necessarily true of all areas – or all property types,” reads an article from the Vancouver Courier, a sister website of REW.ca.

Since peaking in May 2018 when the benchmark home price reached $1,104,600, the Greater Vancouver housing market, which covers a similar geographic area to Metro Vancouver, has undergone a correction.

One year later, the benchmark price has tumbled 8.9 percent to $1,006,400, according to the Real Estate Board of Greater Vancouver.

But the performance of the broader Vancouver market is the sum of developments in many neighbourhoods.

So to take a deeper look into the market, REW.ca examined the sales-to-active listings ratios of 19 neighbourhoods in Metro Vancouver.

The ratio of sales to actively listed homes is a general barometer of market balance.

A ratio over 20 percent suggests a seller’s market, while anywhere between 12 and 20 percent generally means balanced conditions and below 12 percent is a buyer’s market.

Clayton was the only sub-market to surpass the 20-percent threshold in May. There, the sales-to-active listing ratio was 22 percent.

And another pair were only two percentage points shy of the market: Murrayville and Hastings. The other 12 sat in balanced territory at 17 percent.

REW.ca also took into account that market conditions can vary by housing type. What’s a seller’s market for condos may not be one for townhouses, for example.

With a ratio of 21 percent, Garibaldi Heights was the sole market that was in seller’s territory for detached homes, though Aldergrove was just a percentage point shy of the designation.

Meantime, sellers of townhomes had the upper hand in six markets, and condo sellers had an edge in five neighbourhoods.