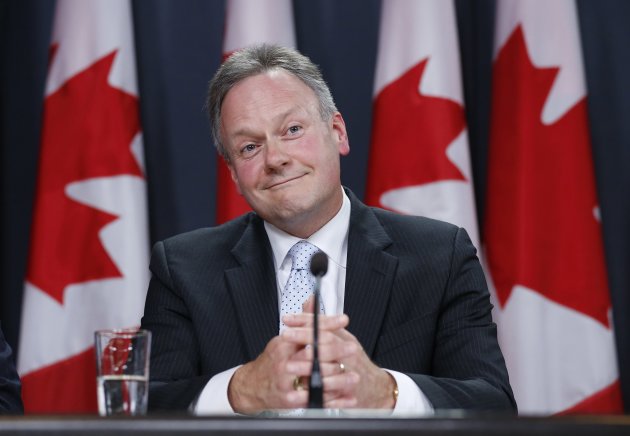 Canada’s central bank could surprise financial markets this week and signal a longer period of ultra-low interest rates, as exports languish and executives display little enthusiasm for spending their excess profits.
Bay Street’s expectations for new Bank of Canada Governor Stephen Poloz’s first policy decision on Wednesday are muted. The economy continues to muddle along, and Mr. Poloz has revealed little about how he will seek to influence policy, making predictions difficult.
“On the nuts and bolts of the decision – keeping the target rate at 1 per cent and maintaining the ‘eventual’ hiking bias – we are unlikely to see any differences,” Mark Chandler, head of Canadian fixed-income strategy at RBC Dominion Securities in Toronto, wrote in a report last week.
Whatever he does, Mr. Poloz will be competing for attention. In London, the Bank of England will release the minutes of Mark Carney’s first policy meeting as governor. Later, Federal Reserve chairman Ben Bernanke will make his first of two appearances on Capitol Hill this week. Mr. Bernanke still will be sparring with lawmakers when Mr. Poloz holds a press conference in Ottawa to explain the Bank of Canada’s latest thinking.
Mr. Poloz easily could get lost in the mix. But that’s not a certainty. It’s possible to imagine a scenario in which the Bank of Canada makes some noise by pushing out the timing of an eventual interest-rate increase. The reason: dimmer short-term economic prospects are preventing the lift-off that the central bank has been anticipating since last year.
Conventional wisdom is that Canada’s central bankers will raise the benchmark interest rate in the later part of 2014, when it will have been frozen at 1 per cent for about four years.
In the spring, the Bank of Canada estimated that the output gap – the difference between actual gross domestic product and what policy makers think the economy can produce without stoking inflation – would close around the middle of 2015.
Since interest-rate changes affect the economy with a lag, the central bank likely will begin raising borrowing costs before the output gap closes. Hence the guesses that the Bank of Canada will lift its benchmark rate in the second half of 2014.
It would be a surprise if the Bank of Canada scrapped its guidance that the benchmark rate eventually is going higher. Central bankers the world over are worried that their aggressive stimulus measures are inflating bubbles. The Bank of Canada’s warning of higher rates is a studied attempt to contain irrational exuberance.
More plausible, if still a long shot, would be a signal this week that the central bank is prepared to follow the Federal Reserve and wait until 2015 to raise its benchmark interest rate.
In June, Mr. Poloz told reporters that the Bank of Canada had done plenty to encourage more business investment and that the time had come to “let Mother Nature do her usual job.” He has compared the state of Canada’s economy to “postwar reconstruction,” explaining that stronger growth is contingent first on a boost in exports, which in turn will inspire executives and business owners to invest more.
The near-term outlook for exports and business investment has weakened since the Bank of Canada’s last quarterly outlook in April.
Last week, the International Monetary Fund cut its 2013 growth forecasts for the United States, China and Europe. That will do nothing to encourage Canadian executives, whose investment intentions are near their lowest level since the third quarter of 2009, according to the Bank of Canada’s summer business outlook survey.
Nor will the sudden jump in the cost of credit. The yield on 10-year Canadian debt has jumped 80 basis points (a basis point is 1/100th of a percentage point) since April, as global rates adjust to the Fed’s inclination to slow its bond-buying program later this year. If the trend continues, it could have a “meaningful impact on growth,” Mr. Chandler said.
At the same time, consumer spending continues to falter, leaving Canada’s economy without an engine capable of driving momentum. “That gives you more of a runway” to leave interest rates low, said Peter Hall, chief economist at Export Development Canada in Ottawa.
Mr. Hall still thinks faster U.S. economic growth next year will prompt the Bank of Canada to raise interest rates at the end of 2014. That makes Mr. Bernanke’s testimony almost as important as Mr. Poloz’s press conference. The long-standing assumption in financial markets is that the Bank of Canada would raise interest rates before the Fed. That assumption no longer is inevitable.
KEVIN CARMICHAEL
The Globe and Mail