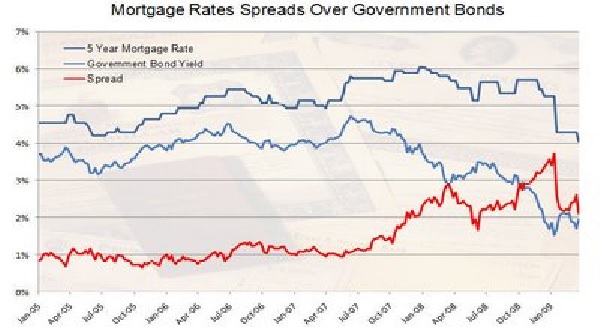 Anyone who has been watching knows that bond yields are falling and taking fixed rate mortgages with them. The recent economic slowdown in both Canada and the U.S. has pushed down yields on five year government bonds on both sides of the border. Those yields are used as the basis for setting interest rates on fixed mortgages.

An economic indicator known as the yield curve is has been getting a lot of attention lately. The curve tracks the difference in the yields of short-term and long-term bonds. Short-term can be as little as three months while long-term is 10 years or more.

Occasionally though things get turned around and the yield curve “inverts”, with short-term bonds offering better yields than long-term. Much is being made of this right now because it has happened, in both Canada and the United States, and it is widely viewed as bad news.

In the U.S., bond yield inversions have routinely been followed by a recession, in about a year. But, like so much of what has happened over the past decade, this time is different. Economists are nearly unanimous in downplaying the risk. They point out that the inversion was not big enough and did not last long enough to trigger any alarms. They also remind us that any possible recession will not happen overnight and is still a year away – plenty of time for action or a correction.