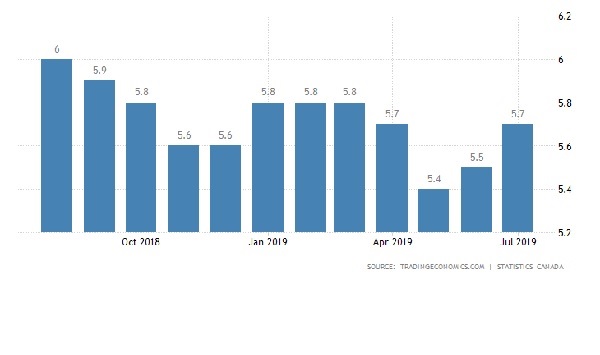 The ups and downs of unemployment and interest rates

Canadian employment took an unexpected hit in July and that has market watchers turning to the Bank of Canada to see if there will be a response. There are a few forecasters predicting a rate cut by the bank in October, but they are in the minority at this time.

Economists will tell you that job numbers are notoriously hard to predict on a month by month basis, so it makes more sense to look at trends and long-term averages.

In July the Canadian economy shed 24,200 jobs, pushing the unemployment rate up 0.2% to 5.7% and marking the third straight month of softening employment numbers. This follows several months of outsized growth. Over the longer term, Canada has more than 350,000 new jobs, compared to a year earlier, most of them full time.

July’s increase in unemployment is also counter balanced by an increase in wage growth. Working Canadians saw their hourly wage jump 4.5% on a year-over-year basis.

This is seen as an indication the labour market is finally starting to tighten up after a long period of economic growth. Analysts also see this as a sign that economic growth may be about to flatten out.

The Bank of Canada is trying to balance its policies between good domestic growth and slowing economies in the U.S. and around the world.

So far those numbers do not add up to any rate moves, up or down.