Why there’s no reason to panic about rising rates

There is a simple answer to all this hysteria about mortgage rates going up. Don’t lock in your rate.

I know it’s almost heresy to have a floating rate in a mortgage world dictated by Finance Minister Jim Flaherty, who thinks nothing about calling up the banks and telling them their rates are too low.

But the reality is that a variable rate mortgage tied to prime can still be had ... The era of pleasant surprises for people renewing their mortgages is over.
After five years of trending lower, mortgage rates have reversed course and started to rise. Aspiring first-time home buyers are being priced out of the market by these increases, but at least they’ve avoided a costly mortgage entanglement. Existing homeowners may simply have to pay more.
Current fixed rate ...
Read More

We put together a list of eight peculiar things that wealthy Chinese people invest an exorbitant amount of money in.Continue reading.

A housing crash based on the type of home you have? Is that really possible?
This time around, many wonder whether a specific type of housing could falter while other categories remain strong. Most eyes are on the condo market in such a scenario.
It certainly didn’t happen that way in the early 1990s. When the real estate market crashed in Toronto, the entire housing sector saw prices plung ...
Read More

Those looking to gain a foothold in Metro Vancouver’s already pricey housing market are facing another hurdle as key financial institutions across the country move to hike mortgage rates.

On Thursday, five-year fixed mortgage rates edged near the four-per-cent range at many financial institutions after hovering near the three-per-cent mark for months. RBC posted its five-year rate at 3.89 pe ...

The discount mortgages that stoked the Canadian housing boom are disappearing, increasing the likelihood of a correction in home values.

On Thursday, Royal Bank of Canada will hike its five-year fixed-rate mortgage to 3.89 per cent, one day after the Bank of Montreal raised its rate to 3.79 per cent. The other major lenders are all moving in the same direction.

The increases mean the cost o ... Canadian Finance Minister Jim Flaherty said he isn’t planning new measures to restrain the country’s housing market because his past four rounds of action have already worked to avoid a bubble.

“So far, I’m satisfied that we have a balance in the real estate sector,” Flaherty told reporters in Wakefield, Quebec, at the start of a policy retreat with business leaders. “There are some bumps al ...


New rules designed to cool hot housing markets in Toronto and Vancouver could send a chill through Ottawa's real estate sector, according to an Ottawa real estate ...

Canada’s housing market: The one that no one can predict

Another month of housing data is guaranteed to produce one thing: more arguments about where the market is going.
Statistics from the Ottawa-based Canadian Real Estate Association show actual July sales were up 9.4% from a year ago while average sale price nationwide rose 8.4% to $382,373 during the same period.
Given the housing market seemed to be sliding just a few months ago, the qu ...
Read More

Take a peek at the recent trend in this chart.

On Wednesday, the 5-year bond ended the day at 1.89%—the highest close in over two years. If you were a trend follower, you wouldn’t bet against rates moving higher from here. But many people are.

Home sales in B.C. soared last month, the highest number for the month of July in eight years, according to the British Columbia Real Estate Association.

The association on Wednesday said a total of 7,650 residential sales were recorded on the Multiple Listing Service, up 18 per cent from July of 2012.

Impact of Limits to CMHC MBS

Most Canadian mortgage lenders fund some portion of their mortgage lending using CMHC’s National Housing Act Mortgage Backed Securities (NHA MBS). That is, cash flows from mortgages are aggregated into investment securities and then sold to investors through a process called securitization. Payments from these mortgage backed securities are guaranteed by the CMHC, and therefore backed by the ...

This Change Will Have a Direct Impact on Rates

Ottawa has been trying to de-risk the housing market since 2008. But all of the mortgage rule tightening since then has only slowed the market for a few quarters at a time. Home prices are still near record highs and sales have rebounded.

It’s not surprising then that officials are taking another step that slows mortgage growth. On Thursday, CMHC imposed limits to the amount of government- ...

August 7th, 2013
For borrowers, your debt ratios or "ability to pay" will largely determine the amount of a loan or whether you may be approved for a mortgage.
For applicants requiring exceptions on debt ratios above the maximum guidelines, it has been tougher to obtain approvals as a direct result of last year's mortgage rules tightening, which imposed stricter debt ratio calculations (among other stricter ...
Read More Canada Mortgage and Housing Corp. is putting a cap on the amount of mortgage-backed securities sold by banks that it is willing to guarantee.

A spokesperson with CMHC confirmed media reports Monday that the national housing agency will, effective immediately, limit banks and other mortgage lenders to $350 million worth of new mortgage-backed securities per month. The decision comes in th ...

If you’ve ever wondered how well the Bank of Canada does its job, check out this chart below from economist Sheryl King.

It shows the trend in Canada’s inflation level back to 1995 (when the BoC started using interest rates as a tool to achieve its 2% inflation target).

As the chart illustrates, inflation tends to stick near 2%. That’s t ... 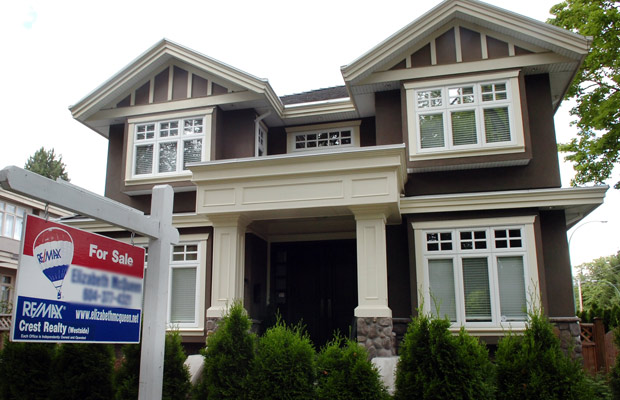 The Real Estate Board of Greater Vancouver (REBGV) reports that residential property sales in Greater Vancouver reached 2,946 on the Multiple Listing Service® (MLS®) in July 2013. This represents a 40.4 per cent ...
Read More

20 ways to come up with a down payment

Coming up with a down payment is often the biggest hurdle for first-time home buyers. Here are some suggestions:

1.   Ask your parents, other relatives or friends for help. If they can't give or loan any money, perhaps they'll agree to co-sign the loan.

2.   Sell (or borrow against) other real estate you own.

3.   Sell securities you own, or borrow against them through a loan from the stock ...