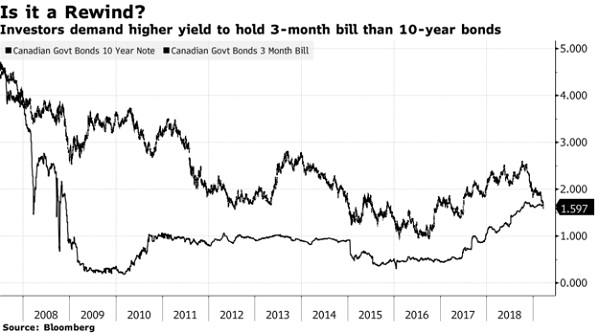 Where are Canadian interest rates heading in 2019? It depends on who you ask

If you’d asked a big bank economist last year where interest rates were headed in 2019, they’d probably have said they were going up.

They had good reason to believe it. The Bank of Canada had hiked its policy rate, which influences mortgage rates, five times since summer 2017, including three times in 2018. The central bank also said this past October that “the policy rate will need to rise.”

Then the economy slumped. Canadian GDP growth disappointed. Economists revised forecasts. Early into this year, most decided rate hikes were off the table.

Enter today’s Labour Force Survey from Statistics Canada, which suggests 107,000 jobs were created in April — the highest jump on record.

To Derek Holt, vice president and head of capital markets economics for Scotiabank, that supports his outlier view that a hike is still on the table for 2019. “Did somebody whisper ‘hike’?” he asks in a response to the data.

“Try yelling it aloud on the back of numbers like this,” he adds, before diving into the StatsCan release.

Some takeaways: in the first four months of this year, employment increased by 220,000, which is closing in on the 238,000 job tally for the entire calendar year of 2018.

Close to 70 percent of the increase was the result of full-time employment.

And growth wasn’t limited to a few fields: there was growth in eight out of the 11 major sectors, including construction, which may be benefiting from a spring homebuilding boom in Ontario and BC.

“Scotia Economics’ position as the only dealer to forecast a rate hike later this year got a shot in the arm by a resoundingly positive jobs report that in turn supports the outlook for consumption and housing,” writes Holt.

As Holt notes himself, the Scotiabank team has been on the fringes in holding onto a call for a hike. On the opposite side is Paul Ashworth, chief North America economist for Capital Economics.

While Ashworth acknowledges that the Canadian economy has improved since the fourth quarter, he believes the Bank of Canada will eventually be forced to cut rates.

“We still doubt that the Bank [of Canada]’s hopes of a strong rebound later this year will materialise, which will eventually force it to cut interest rates later in the year,” he writes.